As many of you may know, Laura Moriarty is touring the country to promote her new book, The Chaperone (Riverhead). It's a captivating novel about the woman who chaperoned an irreverent Louise Brooks to New York City in 1922, and the summer they spent together that would change them both.

In an early scene in the book, Brooks and the chaperone are traveling by train to New York, and to help pass the time, both characters are carrying a book. The chaperone is reading The Age of Innocence, by Edith Wharton. And Brooks, though only 15, is reading a volume of Schopenhauer's essays.

Just the other day, Moriarty stopped in Wichita, Kansas for an appearance at Watermark Books, a local independent bookstore in Brooks' former hometown. In the audience was Rosie Brooks, Louise's niece. (Rosie can be seen in the 1999 documentary, Louise Brooks: Looking for Lulu, directed by Hugh Munro Neely. If you haven't seen it, you should. It is really terrific.)

Rosie Brooks brought along Louise Brooks' own well worn copy of Schopenhauer's essays. The book even contained Brooks' personal bookplate. Here are a couple of additional snapshots of the book itself. 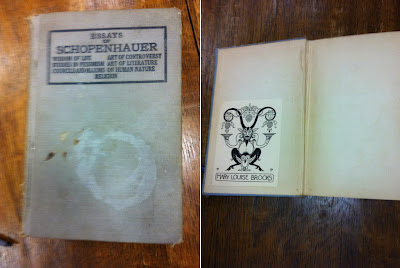 By all accounts, Laura Moriarty's events have been well attended, and her book has been selling briskly just about everywhere. And what's more, some fans, and even some bookstore staff, have been adorning Louise Brooks wigs at events. Here is another snapshot taken at Watermark Books in Wichita. Pictured below are Beth from Watermark, Rosie Brooks and Laura Moriarty in the middle, and Sarah, also with Watermark. 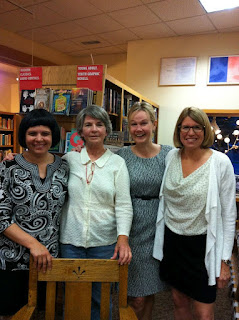 Arthur Schopenhauer (1788 – 1860) was an important figure for Brooks. And, apparently, someone she read pretty much all her life. The German philosopher is mentioned three times in the Barry Paris biography, including this noteworthy passage. "In a 1967 reminiscence called 'Meeting with Pabst,' Lotte Eisner recalled her visit to the Pandora set [in 1928]:


In a corner sat a very beautiful girl reading the Aphorisms of Schopenhauer in an English translation. It seemed absurd that such a beautiful girl should be reading Schopenhauer, and I thought quite angrily that this was some sly publicity stunt of Pabst's. Some 25 years later, I found out that Louise Brooks really did read Schopenhauer."


If you have the chance to see Laura Moriarty talk about her new novel, don't miss it. Her remaining events include

(A big thank you to Laura Moriarty for permission to post these pictures of her Wichita event.)