Pandora's Box with Louise Brooks to screen in Dubai

Pandora's Box, the film in which Louise Brooks famously played Lulu, is considered one of the great works of world cinema. As such, it has been shown in many countries on at least five continents. Now, the silent era masterpiece is coming to Dubai, a city and emirate in the United Arab Emirates (UAE) located on the Arabian peninsula. 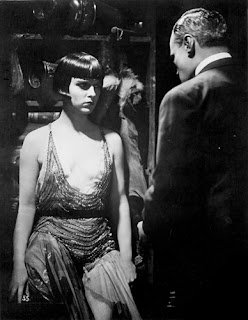 The Dubai International Film Festival has announced that six films representing contemporary and classic German filmmaking will make up “In Focus: Germany,” a segment of the eighth annual festival to be held December 7 to 14, 2011. Among them, representing the classic period, is Pandora's Box (1929). “In Focus Germany” is organized in cooperation with German Films and Goethe-Institut Gulf-Region.

The late silent melodrama, directed by G.W. Pabst, is based on Frank Wedekind’s Lulu plays. According to an article in a UAE newspaper Gulf Today, the film "stars Louise Brooks as a thoughtless young woman who brings ruin to herself and those who love her. Brooks’ intense and timeless performance as Lulu made her one of the icons of cinema."

It's not known if the Dubai International Film Festival showing of Pandora's Box marks its debut in Dubai (which is possible), or even more generally in the Arab Middle East. According to the Louise Brooks Society bibliography of articles about the film, Pandora's Box was shown in Jerusalem in 2002.
Records also show that Brooks' American and European silent films were screened in some of the larger cities in the region in the 1920's and 1930's. For example, it is known that Brooks' 1929 American film The Canary Murder Case was screened in Cairo in the early 1930's, and that her 1930 French film, Prix de Beaute, was shown in what is now Algeria, a former French colony. 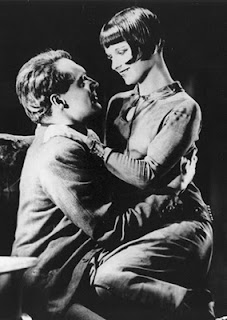 Pandora's Box was not a success when it premiered in Berlin on February of 1929. It only became famous with the re-emergence of its star in the 1960's through the efforts of ardent admirers such as Henri Langlois of the Cinémathèque Française in Paris and James Card of the George Eastman House in Rochester, New York. In the 1950's, 1960's and 1970's it was revived at art houses and festivals in Europe and North America.
The print to be screened at the Dubai International Film Festival has been restored by Martin Koerber of the Deutsche Kinemathek, a project which took over 12 years. The print was shown late last year at the National Film Theater in London as part of the BFI London Film Festival. The new restoration is listed at 143 minutes, ten minutes longer than a “restored version” released by Criterion on DVD in 2008.
In cooperation with the Goethe-Institut Gulf Region, Pandora's Box will be screened for free at The Walk at JBR, the Festival’s outdoor venue, and will be accompanied by the UAE Philharmonic Orchestra (UAEPO) conducted by Philipp Maier.
A bit more about this event on Examiner.com at Pandora's Box to screen in Dubai - National Louise Brooks | Examiner.com http://www.examiner.com/louise-brooks-in-national/pandora-s-box-to-screen-dubai#ixzz1fD5Y4zcM
This blog copyright thomas gladysz / Louise Brooks Society No comments:

Thru December 15th - save 25% off the Louise Brooks Edition of The Diary of a Lost Girl, by Margarete Böhme. This is the book which served as the basis for the 1929 Louise Brooks film of the same name. This sensational bestseller has long been unavailable in English, and only came back into print through the efforts of the Louise Brooks Society. Get a copy today!
Visit http://www.lulu.com/spotlight/LBS1 to purchase the book, and to save, use coupon code BUYMYBOOK305 at check-out. 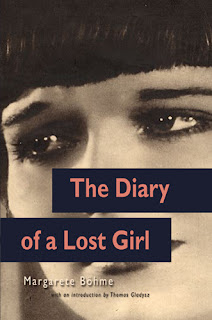 The 1929 Louise Brooks film, Diary of a Lost Girl, is based on a bestselling book first published in Germany in 1905. Though little known today, the book was a sensation at the beginning of the 20th century. Controversy, spirited debate, and even lawsuits followed its publication. By the end of the Twenties, it had sold more than 1,200,000 copies – ranking it among the bestselling books of its time.

Was it – as many believed – the real-life diary of a young woman forced by circumstance into a life of prostitution? Or a sensational and clever fake, one of the first fake novels of its kind? This contested work – a work of unusual historical significance as well as literary sophistication – inspired a sequel, a play, a parody, a score of imitators, and two silent films. The best remembered of these is the often revived G.W. Pabst film starring Louise Brooks.

This new edition of the original English language translation brings this notable work back into print after more than 100 years. And what's more, this special "Louise Brooks Edition" includes three dozen illustrations and a 20 page introduction by Thomas Gladysz, Director of the Louise Brooks Society, detailing the book's remarkable history and relationship to the acclaimed silent film. Find out more at http://www.pandorasbox.com/diary.html
Praise for the Louise Brooks Edition of THE DIARY OF A LOST GIRL


"Gladysz provides an authoritative series of essays that tell us about the author, the notoriety of her work (which was first published in 1905), and its translation to the screen. Production stills, advertisements, and other ephemera illustrate these introductory chapters. In today’s parlance this would be called a 'movie tie-in edition,' but that seems a rather glib way to describe yet another privately published work that reveals an enormous amount of research — and passion." -- Leonard Maltin
"Read today, it's a fascinating time-trip back to another age, and yet remains compelling. As a bonus, Gladysz richly illustrates the text with stills of Brooks from the famous film." -- Jack Garner, Rochester Democrat and Chronicle


"Thomas Gladysz is the leading authority on all matters pertaining to the legendary Louise Brooks. We owe him a debt of gratitude for bringing the groundbreaking novel, The Diary of a Lost Girl - the basis of Miss Brooks's classic 1929 film - back from obscurity. It remains a fascinating work." -- Lon Davis, author of Silent Lives
"Long relegated to the shadows, Margarete Böhme's 1905 novel, The Diary of a Lost Girl has at last made a triumphant return. In reissuing the rare 1907 English translation of Böhme's German text, Thomas Gladysz makes an important contribution to film history, literature, and, in as much as Böhme told her tale with much detail and background contemporary to the day, sociology and history. He gives us the original novel, his informative introduction, and many beautiful and rare illustrations. This reissue is long overdue, and in all ways it is a volume of uncommon merit." -- Richard Buller, author of A Beautiful Fairy Tale: The Life of Actress Lois Moran
"Most certainly a book for all you Louise Brooks fans out there!! And silent cinema fans in general as well." -- Bristol Silents (UK) newsletter
This blog copyright thomas gladysz / Louise Brooks Society No comments:

Kevin Brownlow first befriended Louise Brooks back in the late 1960's. He visited her in Rochester, they exchanged hundreds of letters, and Brownlow filmed an interview with the actress on at least one occasion. Louise was always very interested in Brownlow's work as a film historian, and, his seminal 1968 book, The Parade's Gone By, acknowledges her help and is in effect "dedicated" to her. 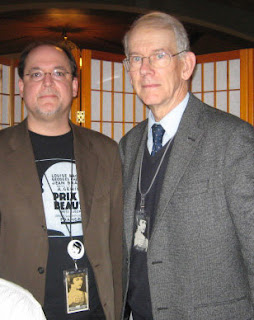 This week, Brownlow is in the United States to give three presentations. If you have never seen him speak, do so. I have seen him speak at least a half-dozen times - and have always found him to be a fascinating speaker. [Pictured right is a snapshot of Kevin and I taken last year in San Francisco.]

On Friday, November 25th, Brownlow will speak at the National Gallery of Art in Washington D.C. about his decades long effort to restore Abel Gance's epic Napoleon (1927). On Saturday, November 26th, Brownlow will give a talk at the Library of Congress about his life as a film historian. This latter presentation, which will include clips from early movies, is set to take place at the LOC Packard Campus Theater in Culpeper, Virginia. And, on December 1st, Brownlow will be speaking at Emory University in Atlanta, Georgia. Follow the above links for more information about each event.

Happy Birthday to Louise Brooks, who was born on this day in 1906 in Cherryvale, Kansas. Celebrate, and give RadioLulu a listen! 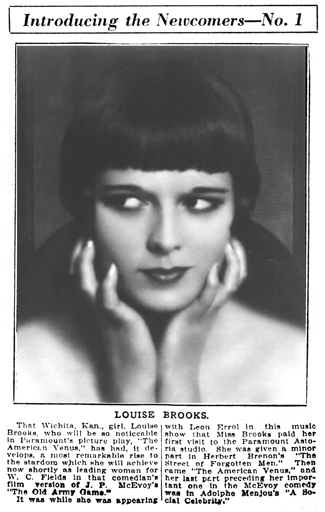 Louise Brooks Society
Online since 1995, the Louise Brooks Society (www.pandorasbox.com) is a web archive and fan club devoted to the Jazz Age movie star known for her bobbed hair & role as Lulu in the classic silent film Pandora's Box. Send announcements or material to share to the email address on the profile page.
Newer Posts Older Posts Home
Subscribe to: Posts (Atom)