Beggars of Life: The Sounds of a Louise Brooks' Silent Film

Beggars of Life is the opening night presentation at this year's San Francisco Silent Film Festival! The acclaimed 1928 Louise Brooks film, directed by Oscar winner William Wellman and starring future Oscar winner Wallace Beery, will be shown on Thursday, June 2nd at 7:00 pm at the historic Castro Theater in San Francisco. The film will be shown with live musical accompaniment by the acclaimed Mont Alto Motion Picture Orchestra. More information, including ticket availability, may be found at HERE. This special presentation is not-to-be-missed, as you never know which "different drummer" will show up.

Though shot as a silent and released in some markets in that format, Beggars of Life has the distinction of being Paramount’s first sound film: a synchronized musical score, sound effects, a few lines of dialogue, as well as a song sung or two were added to prints at the time of the film’s release.

The addition of sound to the film lends another, even more important distinction to Beggars of Life, as the film on which a "boom mic" may have first been used. According to David O. Selznick, "I was also present on the stage when a microphone was moved for the first time by Wellman, believe it or not. Sound was relatively new [this was Beggars of Life, 1928] and at that time the sound engineer insisted that the microphone be steady. Wellman, who had quite a temper in those days, got very angry, took the microphone himself, hung it on a boom, gave orders to record--and moved it."

In the annals of film history, others have been credited with first moving a microphone during the production of a film. Selznick's anecdote, which comes from Kevin Brownlow's The Parade's Gone By, is one of the earliest accounts.

Though the sound elements for the film are lost, newspaper articles and advertisements of the time tell us a little about the nature of the sound version of Beggars of Life. Commenting on its New York City premiere at the Paramount Theater, Women's Wear Daily noted "All of these stars outdo themselves in this picture. Wallace Beery talks in this picture, sings a hobo song and ends with an observation about jungle rats in general." The New Yorker also commented on "the synchronized accompaniment of sentimental music."

Elsewhere, the New Orleans Item observed, "Vitaphone helps the story along with music that is fitting and well arranged. The 'Hallelujah I'm a Bum' rhythm helps the story's speed." Peggy Patton of the Wisconsin News wrote "Wallace Beery, Richard Arlen (also playing in Wings) and Louise Brooks play the featured roles. All do praiseworthy work. By the way it is a sound picture and Wallace Beery speaks a few lines and sings a song. His speaking voice is splendid." Frank Aston of the Cincinnati Post penned, "The direction is admirable. Vitaphonic sounds lend some extra force. Beery is heard singing." The San Diego Union added, "Accompanied by a synchronized musical score of more than average excellence, the picture provides an hour and a half of film entertainment radically out of line with the general run of cinema drama. It is pungent, powerful, appealing, masterfully directed and superbly acted."

Where the sound version of the film played, newspaper advertisements often proclaimed something along the lines of “Come hear Wallace Beery sing!” But what that song was is uncertain. The stout, gravel-voiced actor was not known as a crooner. Reliable sources, including the director's son, site one of two similar titles, “Hark the Bells” or “Don’t You Hear Them Bells?” While at least two newspaper advertisements for the film, including the NYC advertisement pictured above, mention the songs "I Wonder Where She Sits at Night" and "Beggars of Life." 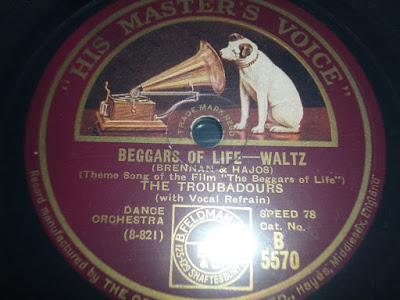 At the time of the film's release, various 78 rpm recordings of  “Beggars of Life” (by J. Keirn Brennan and Karl Hajos) were released. The label on some of those recordings describe it as the “Theme Song of the Film." The best known and most popular of these recordings was by The Troubadours (pictured here); others recordings were issued by Scrappy Lambert, Seger Ellis, and other artists of the time.

Recordings of the theme song proved somewhat popular, and the availability of discs were advertised in newspapers in the United States, England and elsewhere. Below is a newspaper advertisement from Yorkshire, England which promotes the Troubadours' recording of the song.

Below is a video recording The Troubadours' version. It was issued as Victor 21683-B in 1928. Press play to listen. Otherwise, follow these links to hear versions by Scrappy Lambert or the Bar Harbor Society Orchestra. These versions and others can be heard as well on RadioLulu, the online radio station of the Louise Brooks Society. 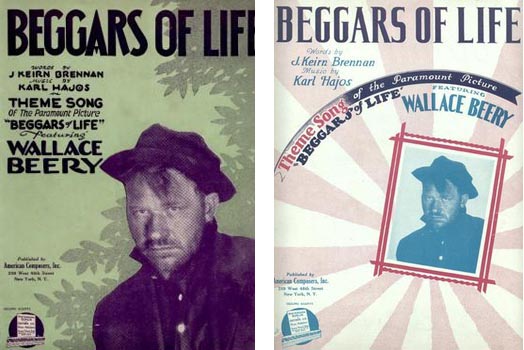 There was even a music roll of "Beggars of Life" released at the time. A copy of this recording, by Harold Wansborough on the QRS label (# 4437), is in the archive of the Louise Brooks Society. However, since it meant for playback on player piano, the LBS doesn't have a way to play or record it! (To get some sense of what this obsolete technology would have sounded like, a piano roll of Wansborough playing "C'est Vous" can be seen and heard here.) 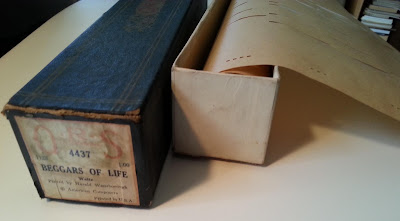 "Beggars of Life"  is a rather enjoyable song. The lyrics read:

"Beggars of life, beggars of life;
Gypsy hearts that are sighing
For skies of blue, sunlight and dew,
Out where swallows are flying.
Each one longing to be led
To a happy homestead,
Where love will cry,
'Don't pass me by!'
Beggars of life, come home!"

UPDATE Beggars of Life in the 21st century: According to Mark Kermode’s book, The Good, The Bad and the Multiplex (2012), The Dodge Brothers musical group once accompanied Beggars of Life at the inaugural New Forest Film Festival in 2010, where in accordance with the Festival theme of sustainability, the film projector at the event was powered by a bicycle! The musical group, which includes Kermode (a popular British film critic) and Neil Brand (a well known silent film accompaniest), has played to the  film all over England, including once in 2014 at a historic screening at the famed Glastonbury Music Festival.


UPDATE: It has just come to the attention of the Louise Brooks Society that a Vitaphone disk for reel 1 of "Beggars of Life" still exists, and is in the hands of a private collector.