Lulu is a newly published comic, or graphic novel, by John Linton Roberson. It is based on the Lulu plays by Frank Wedekind. Those same plays, of course, were the basis for the G.W. Pabst film, Pandora's Box, starring Louise Brooks. They also were the basis for Alban Berg's opera, Lulu, as well as the Lulu Reed & Metallica recording, Lulu, and much else.

These incarnations of Lulu inspired Roberson, who offers an original and up-to-date take on Lulu and her archetypal story. According to Martin Pasko, who wrote the introduction, "LULU translates into graphic storytelling terms Wedekind’s meditation on sexual repression and its role in facilitating exploitative seduction with all its disturbing ferocity intact." This ain't for the faint of heart, nor the underage. Roberson's work has been described by critics as "fairly obsessed with sex & death." He disagrees with "fairly."

Roberson's latest is book one of Lulu. More volumes are in the works. In an extensive interview with Robb Orr on the Comics Forge website, Roberson was asked, "Which elements of Wedekind’s LULU inspired you to adapt it into a comic format?"


Partly its history–it’s been adapted a number of times before to different media, most famously as Alban Berg’s opera and, even more famously, Pabst’s silent film with Louise Brooks PANDORA’S BOX (which is basically just the second play, and which most readers if interested can see on TCM quite often). Brooks in fact became so identified with Lulu that the name is almost a synonym for her, but i avoided my Lulu looking like her. Mine is based on an Italian actress some might know from 1900 and SUSPIRIA, Stefania Casini. But it was also adapted as a film in 1923 with Asta Nielsen and in 1980 by Walerian Borowczyk for French TV. That particular version is interesting–though it’s not the best–because it deals with the erotic content of the plays more openly than other versions, though Berg’s opera does so too; besides that it’s one of the few modernist operas that appears regularly, it’s also one of the only ones to regularly feature nudity and sexual content. That caught my interest because most people seem to think the classics are “clean” and I like to point out that they’re not, that’s just how we’re taught they are. The work takes a remarkably modern view of sexuality and women–both with Lulu and Geschwitz–and challenges a lot of our set ideas of how women were viewed at the time. It’s also never been adapted for comics, as far as I know, except one scene used in Moore & O’Neill’s LEAGUE OF EXTRAORDINARY GENTLEMEN: CENTURY 1910, mashed up with–and killed by–Macheath from THREEPENNY OPERA. And then there’s that it’s a chance to do something in comics very different than a lot of the sci-fi, horror and superhero stuff that presently predominates, and of which I’m kinda sick.


John Linton Roberson is the creator of VITRIOL, VLADRUSHKA, ROSA & ANNALISA, MARTHA, the play SUSPENSION OF DISBELIEF, and numerous other works in comics, script and prose. For more about the artist and his new work, check out his website. Lulu is available on Amazon.com and on Createspace. 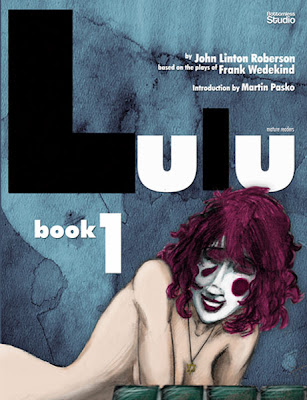