I had a great time at the recent San Francisco Silent Film Festival. Though I worked the book table throughout the festival (and was even interviewed by Turner Classic Movies in my role as a bookseller), I managed to see some films, made some new friends, and renewed some old acquaintanceships. I met TCM host Robert Osborne, and chatted with San Francisco Chroniclefilm critic Mick LaSalle, who surprised me by revealing a new-found appreciation for Louise Brooks and her role in Pandora's Box. Later, noticing my Louise Brooks Society t-shirt, the always affable Leonard Maltin asked me if I had made any converts at the Festival. I responded that I was always "proselytizing" . . . .and then I handed him a Lulu button. I also met author, promoter and all-around film noir expert Eddie Muller, who told me he is currently making a noirish film whose turning point revolves around a character uttering the words, "Louise Brooks." I can't wait to see it, as all of Muller's film noir projects are very stylish and very interesting.

The San Francisco Silent Film Festival is a great festival and a lot of fun. I would encourage everyone to attend future festivals. Various reports, posts and blogs on this year's event can be found on the Google newsgroup, alt.movies.silent. Check it out and see what others thought of the goings-on and the films shown.

The highlight of the festival, for me, was the screening of the 1928 Louise Brooks film, Beggars of Life. A new 35mm print from the George Eastman House made it's West Coast premiere at this annual July event. Pictured below top left is the Castro Theater marquee promoting the Saturday films. It's cool to see a Brooks film "up in lights" - so to speak.

The guy with the glasses top right is me. I am standing next to William Wellman Jr., the son of the great director whose films include Beggars of Life as well as such landmark works as Wings, The Public Enemy, the original A Star is Born, Beau Geste, The Ox-Bow Incident, etc.... Wellman Jr. and I got to chat quite a bit over the course of the weekend. He is an accomplished actor and producer, as well as an historian and champion of his father's incredible body of work. Wellman Jr. told me about his father, and what his father told him about working with Louise Brooks. . . .

Wellman Jr. was on hand to say a few words about his father's films and Beggars of Life. Before a crowd of more than 1200, Wellman praised Brooks and her role in the film. I think he was stating something many in the audience felt, including Leonard Maltin, who wrote about the Festivala few days later. (I think Maltin's comments - and those of Pat Loughney of the George Eastman House - will be of interest to all Brooks fans!)
Louise Brooks fans, who are legion, packed the Castro on Saturday night for the screening of Beggars of Life, Jim Tully’s tale of hoboes in which she and Richard Arlen make an absolutely gorgeous duo. It was introduced by William Wellman, Jr., the able keeper of his father’s flame. The 35mm print was enlarged from the only surviving copy of this important film, a 16mm original owned by the late William K. Everson. I first saw this when Bill screened that print many years ago, but I never dreamt that it was a unique copy. It made a surprisingly good transition to 35mm, although some of the beautiful lighting suffered somewhat because of wear and tear to the original. (I asked Pat Loughney if it would be possible—or feasible—to now digitize that 35mm blowup, improve the contrast and remove some of the scratches, then transfer it back to film. He anticipated my question and said it’s one of his priorities to do just that. Modern technology offers possibilities for film restoration that didn’t exist just ten years ago.)
Pictured bottom left is Wellman Jr., who is signing copies of his book, The Man and His Wings: William A. Wellman and the Making of the First Best Picture. I started reading this recently published book, and can report it is very good. Brooks' and her role in Beggars of Life are given a few pages in this telling of the famous director's early life. There are also a couple of images from the film found in the book.  The bottom right picture is a snapshot I took of Wellman Jr. reading Lulu in Hollywood. At the time, Wellman was reading Brooks' essay about his father, "On Location with Billy Wellman."

Also seen on the table in the bottom left images is a VHS copy of Wild Bill: Hollywood Maverick, the acclaimed 1996 documentary about his father which Wellman Jr. executive co-produced and appears in. My wife (in the green jacket) and I just watched this outstanding 90 minute film last night. We both thought it was excellent - and a great piece of Hollywood history. I would recommend it. I liked it so much that I added four Wellman films to our Netflix cue. (For the record, neither Louise Brooks nor Beggars of Life are depicted in this film, though the actress is referenced by one of the commentators.) 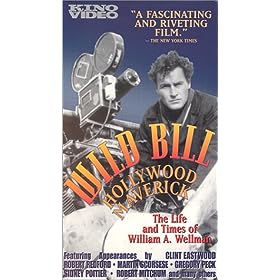 Wellman Jr. had a few VHS copies Wild Bill: Hollywood Maverick for sale. We bought one. I think interested individuals can find second-hand VHS copies on-line. The documentary has not yet been released on DVD. Also for sale at the Festival was a 10 page pamphlet produced by Rodney Sauer, Director of the Mont Alto Motion Picture Orchestra. I had a chance to meet Rodney, and talk a little bit about their efforts. The Mont Alto Motion Picture Orchestra performed live musical accompaniment for a few films during the Festival, including Beggars of Life. Not surprisingly, Rodney is a Brooks fan. Their arrangement and score came in for very warm applause. More about this talented musical group can be found at their website.

What did I see at the Festival? Along with the above mentioned items, I saw the pleasing Student Price in Old Heidelberg (satrring Ramon Navarro and Norma Shearer - and with Mick LaSalle's thoughtful introduction), a panel on film preservation, a few film shorts, and the dark, brooding British film, A Cottage on Dartmoor. I was especially impressed with this noir-ish silent film, as was everyone else I spoke with. I missedMiss Lulu Bett - which is something I have seen on video and liked. I also unfortunately missed The Godless Girl (a Cecil B. DeMille film starring Marie Prevost and Lina Basquette), as it was time to break down our book table and go home. Fortunately, the film will be released on DVD in the Fall as part of the third groundbreaking set in the Treasures from American Archives series.