On May 1, 1924 Louise Brooks was in New Brunswick, New Jersey -- performing at the Rivoli Theatre as a member of the Denishawn Dance Company. Some five days later, she was dismissed from the company by Ruth St. Denis, bringing an end to a glorious beginning to her professional life as a dancer and actress.

Had she not left her home to join Denishawn in the summer of 1922, the 17 year old Brooks might have been among the crowds lining the streets to watch the Boys Loyalty Parade as it marched down Douglas Avenue in downtown Wichita on May 1, 1924.

A few days ago, the Wichita Eagle broke the news about a rare five minute film documenting that very parade, offering rare glimpses of the very streets a teenage Brooks knew as home. According to the Wichita eagle, the recently discovered "five-minute clip, now posted on the [Wichita-Sedgwick County Historical Museum's] YouTube Channel, shows a snapshot of life in Wichita 95 years ago. In it, hundreds of people in dresses, suits and hats fashionable in the day are lined up along the 100 block and 200 blocks of East Douglas watching as men and boys in suit jacks, ties and page boy caps proceed down the street representing various groups, including schools like Hamilton, Allison and Horace Mann and groups like the Lions Club and Boy Scouts."

Something that jumps out to me are the handful of young women wearing bobbed hair and bangs, similar to the style Brooks wore while attending high school in Wichita. One young women in particular is readily apparent in the lower left hand corner of the frame through out the beginning of this appropriately silent film.

The description of the film on Wichita-Sedgwick County Historical Museum's YouTube page reads: "Parade on the 100 block of East Douglas looking west towards the Broadview Hotel (view of the Holland Theater, 118 E. Douglas and the Rothenberg at 128) and looking East to the Eaton Hotel and beyond (including the Kress at 224 and Innes at 300). Officials view the parade from a viewing platform in front of the Kansas Theater (221) the Walk-Over boot Shop (219) and Taylor's Cafeteria (217 E Douglas). Groups in the parade include the American Indian Institute, Kiwanis and Lions Clubs, YMCA, Boy Scouts, Allison, Roosevelt, Hamilton, Harry Street, Ingalls, Horace Mann, and Cathedral schools, unidentified group of African American young men, and an unidentified girls and boys band. Most are on foot, but some ride bicycles. Street cars are in some scenes. Later footage shows the group swearing allegiance to the flag in what looks like a park.Boys' Loyalty Parade was sponsored by the Wichita Rotary Club."

I don't know that Brooks ever saw a movie at the Holland or Kansas theaters (mentioned above), or got a bite to eat at Taylor's Cafeteria  -- but she did go to Horace Mann school and was a member of the local girl scouts. This bit of film brings us that much closer to experiencing and understanding her early life. Here is a rare image of Louise Brooks, taken from her sophomore high school yearbook., followed by another rare image. 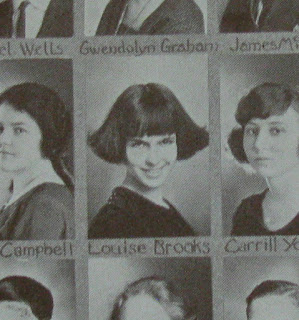 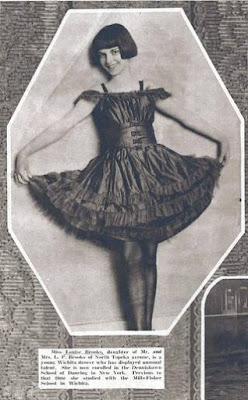