RadioLulu is a Louise Brooks-inspired, silent film-themed internet station streaming music of the 1920s, 1930s, and today. Located on the web at http://192.99.8.170/start/radiolulu/ — RadioLulu features vintage and contemporary music related to Louise Brooks as well as the silent and early sound eras.

Launched in 2002, this unique station features vintage music from five of Brooks’ films — the haunting themes from Beggars of Life (1928) and Prix de Beauté (1930), as well as musical passages from The Canary Murder Case (1929), Empty Saddles (1936), and Overland Stage Raiders (1938). On RadioLulu, you’ll also hear the familiar "Sidewalks of New York" (which was played on the set of The Street of Forgotten Men), as well as John Philip Sousa's seldom heard "Atlantic City Beauty Pageant" (which was written for the Miss America contest, as seen in The American Venus).

Vintage recordings by Brooks’ screen co-stars are also featured on RadioLulu. Among them are Adolphe Menjou, Esther Ralston, Dorothy Mackaill, James Hall, Lawrence Gray, Noah Beery, Frank Fay, Joan Blondell, and Buck Jones. There is even a song by Blanche Ring, who appeared in It's the Old Army Game and was the aunt of Brooks' first husband, Eddie Sutherland. A few of Brooks’ European co-stars are also represented, among them Siegfried Arno (Pandora’s Box), Kurt Gerron (Diary of a Lost Girl), and Andre Roanne (Prix de Beauté). Each is a rarity. As well, there are vintage tracks associated with Brooks’ brief time with the Ziegfeld Follies, including a handful of recordings by performers who shared the stage with the actress, such as Ethel Shutta, Leon Erroll, and the great W.C. Fields.

RadioLulu includes a number of songs by Brooks' friends and acquaintances, as well as individuals she worked with over the years. Actress Tallulah Bankhead, chanteuse Lucienne Boyer, torch singer Libby Holman, bandleader Emil Coleman, and nightclub owner Bruz Fletcher can all be heard on RadioLulu. Other tracks associated with the actress and featured on RadioLulu include George Gershwin's "Somebody Loves Me" (Brooks knew Gershwin, and this was her favorite Gershwin song), Xavier Cugat's "Siboney" (recommended by Brooks in her rare booklet, Fundamentals of Good Ballroom Dancing), and two numbers by Sid Kay's Fellows (the jazz band seen playing in the wedding reception scene in Pandora's Box). 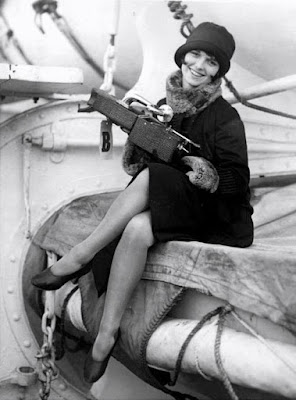 All together, RadioLulu features more than 850 tracks! Notably, many of them come from rare 78 rpm discs you’re unlikely to hear anywhere else. Of course, there's Maurice Chevalier's much-loved “Louise” as well as more than a dozen tracks with Louise, Lulu, or LouLou in the title. Among them is the Coon-Sanders Nighthawks' recording of "Louise, You Tease," as well as a number of different recordings of both "Don't Bring Lulu" and "Lulu's Back in Town".

Many contemporary tributes to the actress can also be heard on RadioLulu. These include songs by Natalie Merchant, Rufus Wainwright, Orchestral Manoeuvers in the Dark (OMD), John Zorn, and Soul Coughing. Famed cartoonist Robert Crumb is heard on "Chanson pour Louise Brooks". And there's Ross Berkal's tribute, "MLB (for Louise Brooks)". Berkal, who is mentioned in the Barry Paris biography and is a longtime member of the Louise Brooks Society, was acquainted with the actress later in her life.

Beyond songs related to Louise Brooks, RadioLulu also features hundreds of songs from the 1920s and 1930s (along with a smattering from the 1940s, 1950s, and 1960s). There is music from the movies aplenty, as well as rare recordings by early Hollywood stars and Jazz Age celebrities. There are tracks by the popular crooners and torch singers of the time, as well as little known numbers by regional dance bands and hotel orchestras. There are also early Broadway show tunes, early European jazz, popular vocal numbers, theme songs, and even a few novelty numbers.

Among others, Janet Gaynor and Charles Farrell are heard singing the classic “If I Had A Talking Picture Of You,” one of a number of movie-related songs. There’s also “Take Your Girlie to the Movies,” “At the Moving Picture Ball,” and “Hooray for Hollywood,” as well as rare vintage recordings about Chaplin, Garbo, Keaton, Mickey Mouse and Zasu Pitts. Be sure not to miss H. Robinson Cleaver’s “Grace Moore Medley,” Fred Bird & Luigi Bernauer’s “Hallo Hallo Hier Radio,” and Jack Hylton and His Orchestra’s “My brother makes the noises for the talkies.”

What else can be heard on RadioLulu? How about Constance Bennett singing “Boulevard of Broken Dreams,” or Alice White & Blanche Sweet singing “There’s A Tear For Every Smile in Hollywood” (from the soundtrack to Showgirl in Hollywood). The Waldorf-Astoria Dance Orchestra performs “The Vamp,” Nate Shilkret plays “Flapperette,” and Marion Harris sings “I’m a Jazz Vampire.” Regulations explaining proper radio station identification are given by none other than Cary Grant, co-star of the 1937 Brooks’ film, When You’re in Love.

RadioLulu features many of the leading stars of the Jazz Age and Depression era—Rudy Vallee, Russ Colombo, Ben Selvin, Fred Waring, Ted Weems, Paul Whiteman, Annette Hanshaw, Helen Kane, Mildred Bailey, Lee Wiley, Ruth Etting, Kay Thompson, and Frankie Trumbauer. There are recordings by such famous names as Duke Ellington, Fred Astaire, Bing Crosby and Benny Goodman, alongside rarely heard artists like the Eskimo Pie Orchestra and the Brox Sisters, as well as Scrappy Lambert, Fred Elizalde, and Dorothy Dickson! You never know who or what will turn up on this eclectic, always entertaining station.

And that’s not all…. RadioLulu plays Ragtime, swing, standards, and some real hot jazz, including such popular hits as the “Charleston,” “Black Bottom,” and “Varsity Rag.” There are vintage recordings of popular favorites like “Stardust” and “As Time Goes By,” along with great, but little known works like James P. Johnson’s “You’ve Got to be Modernistic.” By the way, the single longest track is George Jessel’s spoken word history “The Roaring Twenties 1920-1929.”

Among the unusual European numbers on RadioLulu are little heard gems from the 1930s Polish chanteuse Hanka Ordonówna as well as the Gershwin of Czechoslovakia, Jaroslav Jezek; there’s a stirring number by the great British cinema organist Sidney Torch; and even a 1929 recording of the German dramatist Bertolt Brecht singing “Mack the Knife.” Along with lovely favorites by the likes of Josephine Baker, Django Rheinhart, and Mistinguett. Also heard are artist models Suzy Solidor and Kiki of Montparnasse. Both posed for the surrealist photographer Man Ray, an admirer of Louise Brooks. 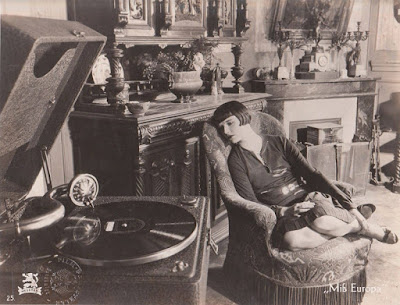 Here are ten vintage RadioLulu tracks you won’t want to miss: “Makin’ Whoopee” by B.A. Rolfe & His Lucky Strike Orchestra, “Runnin’ Wild” by Isabella Patricola, “The Sheik of Araby” by Fats Waller, “My Man” by Fanny Brice, and “Puttin on the Ritz” by Harry Richman, as well as “You Oughta be In Pictures” by Little Jack Little & His Orchestra, “College Rhythm” by Jimmy Grier, “Singin’ In The Rain” by Cliff Edwards (Ukulele Ike), “Slumming On Park Avenue” by Alice Faye, and “Ramona” by Dolores Del Rio.

And here are ten contemporary RadioLulu tracks you won’t want to miss: “Lulu” by Twiggy (the 1960’s supermodel), “Valentino” by Connie Francis, “Louise” by Eric Clapton, “Weight Lifting Lulu” by The Residents, “Interior Lulu” by Marillion, as well as “Marlene Dietrich’s Favourite Poem” by Peter Murphy, “I’m In Love With A German Film Star” by The Passions, “Just Like Fred Astaire” by James, “Lulu Land” by Camper van Beethoven, and “Brandenburg Gate” by Lou Reed & Metallica (from their Lulu album).

Over the years, this unique, long running station has gained many fans and listeners. Famed film critic Leonard Maltin once rated it a “Wow.” Likewise, Louise Brooks devotee and celebrated Dr. Who actor Paul McGann called it “incredible.” The Pulitzer-Prize winning graphic novelist Art Spiegelman (author of Maus) has tuned-in on occasion, and told us so. As has the award-winning science fiction writer Richard Kadrey. And would you believe that a retro Spanish pop/swing/rock group named Radio Lulu named themselves after the station?

Music has played a significant role in the life and films of Louise Brooks. That’s why RadioLulu was started, as a means of sharing some of the many rare and related recordings collected by the Louise Brooks Society. Listen today for free by clicking on the widget at the top of the page. Let us know what you like or don’t like, and what you might want to hear. Got something to contribute. We would like to hear about that too.

Thank you for your interest in Louise Brooks, RadioLulu, and the Louise Brooks Society. Be sure to follow RadioLulu on TWITTER or FACEBOOK. And, for even more fun, visit the LBS account on SOUNDCLOUD for more related audio rarities.