Giving it away at a Louise Brooks screening

I suppose we have all heard about how, in the past, theatres would give away things for free in order to lure viewers. I remember my mother, who as a girl and young women went to the movies in the 1930s and 1940s, telling me about the films she went to see where the theatre gave away dinnerware and silverware. The give away was usually one piece at a time, so you had to go to the movies pretty regularly to build a set.

In the past, while searching for yet more material about Louise Brooks and her film, I have run across a few advertisements in which a theatre was giving away a dinner plate or piece of silverware in conjunction with the showing of a Brooks film. Last night I found something wholly new. I found a couple of advertisements for a theatre in Brooklyn which was giving away gold. This first example, shown below, promotes a February 4, 1927 showing of Love Em & Leave Em at which $5.00 in gold would be given away for free every evening. 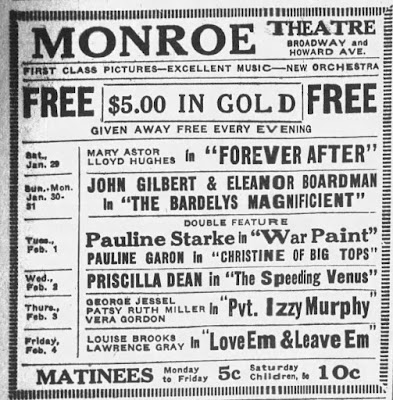 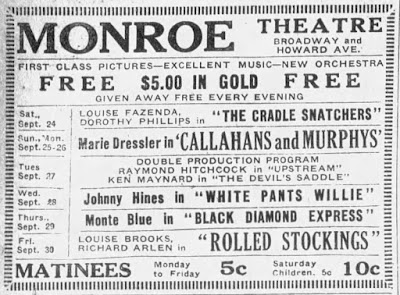 It seems as though the Monroe theater discontinued its gold giveaway promotion sometime around 1928, as the Brooks' films I found advertised then, such as A Girl in Every Port and Beggars of Life, do not mention the practice.

It's interesting that Brooks is listed first, ahead of the male star, in both of these ads. Especially so in regards to Love Em and Leave Em, where Evelyn Brent - who is not mentioned, was considered the lead star in the picture. It is also interesting that the Monroe really had to sell itself, offering not only gold but also "first class pictures" and a "new orchestra." Both ads date to more than two years before the Depression, when times were still good.

According to Cinema Treasures website, the Monroe was a single screen, nearly 500 seat venue which started as a vaudeville house (in 1915?) and later, by 1926, was showing films. (Check the Cinema Treasures page for photos of the exterior of the building.) The Monroe closed decades later, and has since been demolished. 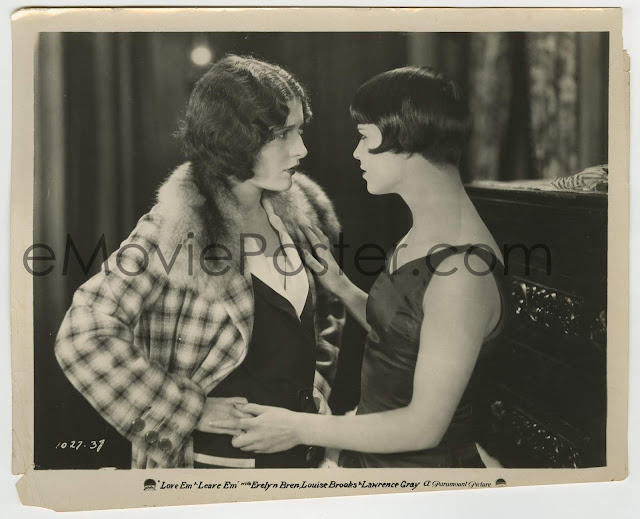