As seen on TV - Louise Brooks the Persistent Star gets screen time during LA news story.

My book, Louise Brooks the Persistent Star, received some screen time the other day during a news story on Los Angeles TV.  The 2018 book can be seen over Jeff Mantor's right shoulder throughout the short news segment on Larry Edmunds bookshop. The online text version of this news story can be viewed HERE, while the video can be viewed HERE. 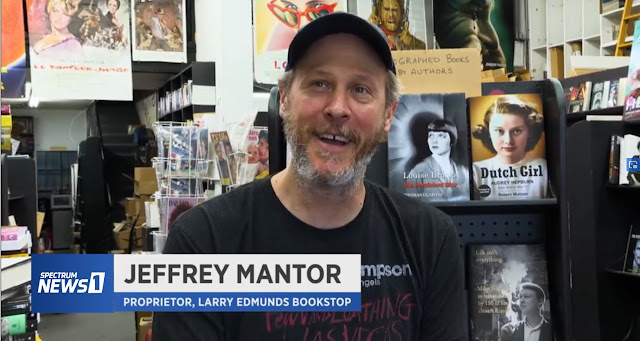 The Larry Edmunds Bookshop has been a Hollywood landmark since 1938. Now, it is the last of its kind. Like many small retailers, including and especially bookstores, the Larry Edmunds bookshop is struggling to make ends meet. Just recently, they launched a GoFundMe campaign to make ends meet. It is a worthwhile cause -  especially if you love books & film, and one I would suggest everyone contribute at least a little to. Already, everyone from director Steven Soderbergh to screenwriter Marti Noxon (Buffy the Vampire Slayer) to film historians James Curtis (W. C. Fields) and Donna Hill (Rudolph Valentino) to and the czar of film noir Eddie Muller and have made donations. And seemingly, so have the spirits of Fred Astaire and Rock Hudon. As well as the Louise Brooks Society.

If you would rather order a book, why not do so? Chances are, the Larry Edmunds bookshop has the film book you are looking for. Some of their current selection is how below. Check out their website HERE. Or check out their Facebook page HERE. 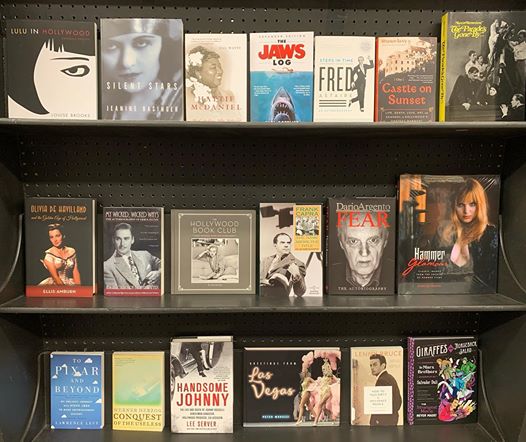 At the end of February, I did one of the very last events put on by the store before the Covid-19 pandemic closed things down. It was a book signing in conjunction with the showing of Pandora's Box at the American Cinematheque / Egyptian theatre in Hollywood. I left some autographed books with Jeff which were put on sale. And that's why Louise Brooks the Persistent Star is on display at the bookshop. Jeff should have autographed copies of each of my recent books. See this EARLIER BLOG. 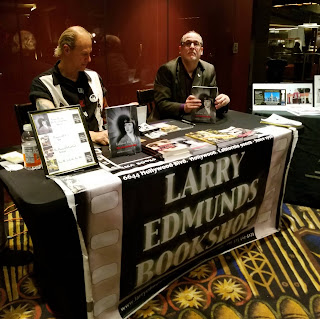 Speaking of my books, I want to thank the CMBA (Classic Movie Blog Association) for featuring my titles on a recent April blog post, "Books, Books, Books, 7th edition." Be sure and check it out.