Before the coronavirus interrupted life as we knew it, there was a book I was meaning to write-up here on the Louise Brooks Society blog. That book is Rediscovering Roscoe: The Films of “Fatty” Arbuckle, by Steve Massa. It is an excellent read, and a book that belong on the shelf of anyone interested in silent era comedy. 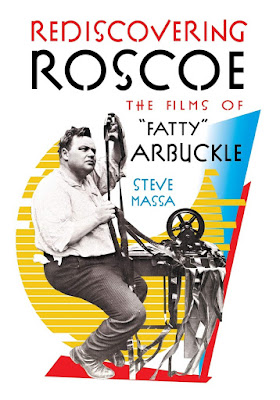 Today is Roscoe Arbuckle's birthday. He was born on this day in 1887. He would have been 133, but regretably only lived to the age of 46. As Massa stated on Facebook earlier today, Arbuckle was "One of the great innovators of silent comedy, he was much maligned during his life but a substantial number of his films survive to perpetuate his talents and secure his place in film comedy history."

According to Bear Manor, Massa's publisher: "Roscoe 'Fatty' Arbuckle was a silent comedy trailblazer — the teacher of Buster Keaton, a collaborator of Charlie Chaplin — whose reputation was eclipsed for many years by his involvement in one of Hollywood's first scandals. Rediscovering Roscoe is a film by film examination of his work as a performer, director, and all around comedy creator. Having learned and developed his craft on the stage, Arbuckle came to films in 1909. After joining Mack Sennett's Keystone Company he became one of the most important pioneers of American silent comedy, as well as a screen icon known around the world. This filmography details his initial forays into films and mastering of the medium, but also his banishment from the screen and ultimate comeback. It is lavishly illustrated with more than 500 rare photographs and advertising images."

Arbuckle's career was indeed legendary. Early on, he worked with both Mabel Normand and Harold Lloyd, as well as with his gifted nephew Al St. John. He mentored Charlie Chaplin and discovered both Buster Keaton and Bob Hope. He was one of the most popular silent stars of the 1910s, and one of the highest paid actors in Hollywood. Arbuckle wrote, directed, and starred in dozens of short films, as well as a handful of feature films. All of these films, as well as those he directed under a pseudonym after his fall from grace following the Virginia Rappe trial, are covered in Massa's detailed book.

Louise Brooks adored this portly actor, who she described as "the great Roscoe Arbuckle." In Kevin Brownlow's book, The Parade's Gone By, she states "I thought he was magnificent in films. He was a wonderful dancer — a wonderful ballroom dancer in his heyday. It was like floating in the arms of a huge doughnut — really delightful."

Brooks and Arbuckle worked together on Windy Riley Goes Hollywood. This flaccid 1931 short from Educational Pictures was directed by Arbuckle under the pseudonym William Goodrich, with Brooks starring as Betty Grey, a dancer. As Massa notes in his section on the film, Windy Riley is not one of Arbuckle's better surviving talkies, but it does give a behind-the-scenes look at a real movie studio. Additionally, for fans of Brooks, it shows the actress dancing — and we get to hear her voice, which is pleasant and records well.

In its short review, Motion Picture Herald stated, “The auto record of Windy Riley from New York to Hollywood and the subsequent excitement at a studio when he works a fake publicity stunt, cannot be rated more than fair. The story by Ken Kling is not at all unusual. Jack Shutta, Louise Brooks, William Davidson, Dell Henderson, Wilbur Mack and Walter Merrill do their best but not very successfully.”

According to Brooks, Arbuckle "made no attempt to direct." Instead, "he sat in his chair like a man dead. He had been very nice and sweetly dead ever since the scandal that ruined his career" and forced him to work on third rate material under a pseudonym.

Though Windy Riley Goes Hollywood was largely a failure, Arbuckle can be credited with numerous successes. Those earlier films are at the heart of Massa's splendid new book. Besides it's heavily annotated filmography, Rediscovering Roscoe: The Films of “Fatty” Arbuckle includes a foreword by critic Dave Kehr, an introduction by musician Ben Model, a succinct biography of Arbuckle, the story of his banishment and work under a pseudonym, a guide to seeing the films today, and an insightful essay, "The Screen Must Have a Fat Comedian." There is a lot packed into its nearly 700 pages.

As Model notes in his introduction, "The so-called “silent” era was more than the starting point of American film comedy. It was its Big Bang. Not only were the basics of screen comedy developed and established during that time — specifically from the early ‘teens through 1929 — but something else magical came from the cauldron of silent film comedy: the comedian/filmmaker." Prominent among them is the one and only Roscoe Arbuckle. Massa's book makes the case for his greatness.

Besides Rediscovering Roscoe: The Films of “Fatty” Arbuckle, Steve Massa is the author of  two other books which I am pleased to own, Lame Brains and Lunatics: The Good, The Bad, and the Forgotten of Silent Comedy (Bear Manor Media, 2013), and Marcel Perez: The International Mirth-Maker (CreateSpace, 2014). Each are groundbreaking. Massa is also the author of another groundbreaking work, Slaptstick Divas: The Women of Silent Comedy (Bear Manor Media, 2017). I liked it so much that my Huffington Post articles, "Best Film Books of 2017" and "Best Film Books of 2017: Silent Comedy Edition," featured it TWICE.

Back then, I wrote, "One can’t say enough about this book, and that’s why it’s included in this round-up as well as in my earlier piece on the Best Film Books of 2017.... I said it before, and I’ll say it again: Steve Massa has written a highly recommended book which belongs on the shelves of anyone interested in early film comedy or women’s film history." The same, I would say, applies to Rediscovering Roscoe: The Films of “Fatty” Arbuckle. 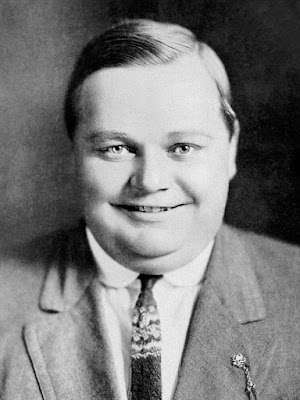