If you are still looking for just the right gift for the Louise Brooks or silent film fan on your holiday list, may I suggest Diary of the Lost Girl, either the "Louise Brooks edition" of the book that was the basis for the film, or the recently released Kino Lorber DVD or Blu-ray. (Send me your order for both items within the next five minutes and you will receive an autographed copy of each item plus free shipping -- please indicate which format disc you prefer. Offer valid only in the United States.) 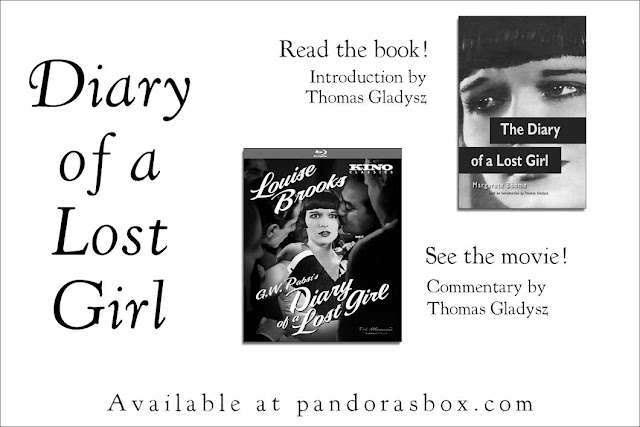 Need some convincing? Here are some of the reviews for each item. Don't hesitate. Quantities are limited!

The Diary of a Lost Girl (book)


“Most certainly a book for all you Louise Brooks fans out there! And silent cinema fans as well.” – Bristol Silents (UK)

“In today’s parlance this would be called a ‘movie tie-in edition,’ but that seems a rather glib way to describe yet another privately published work that reveals an enormous amount of research — and passion.” – Leonard Maltin, Movie Crazy

“Read today, it’s a fascinating time-trip back to another age, and yet remains compelling.” – Jack Garner, Rochester Democrat and Chronicle

“It was such a pleasure to come upon your well documented and beautifully presented edition.” – Elizabeth Boa, University of Nottingham (UK)

“Long relegated to the shadows, Margarete Böhme’s 1905 novel, The Diary of a Lost Girl has at last made a triumphant return. In reissuing the rare 1907 English translation of Böhme’s German text, Thomas Gladysz makes an important contribution to film history, literature, and, in as much as Böhme told her tale with much detail and background contemporary to the day, sociology and history. This reissue is long overdue, and in all ways it is a volume of uncommon merit.” – Richard Buller, author of A Beautiful Fairy Tale: The Life of Actress Lois Moran

“An amazing forward that chronicles the history of Margarete Bohme’s book … a must for any silent film fan.” — silenthollywood.com

“Historian Thomas Gladysz has done the silent film community an interesting service: He has made available the original English translation of Margaret Bohme’s novel, The Diary of a Lost Girl. To fans of the beautiful actress Louise Brooks, this is a significant contribution indeed. What makes this new book so appealing is the way in which Mr. Gladysz has presented the vintage material. Featuring a scholarly introduction and numerous, wonderfully reproduced stills and rare advertisements, it is a pleasure to behold. It is also obviously a labor of love.” – Lon Davis, author of Silent Lives


"In this masterful restoration, from archival 35 mm elements, DIARY benefits from an incisive commentary by the director of the Louise Brooks Society Thomas Gladysz." -- Stephen Schaefer,  Boston Herald

"This DVD is the best possible restored version, and is beautiful in its imagery, and in Brooks' performance. This new release also benefits from a well-researched and often-fascinating commentary track by Thomas Gladysz, director of the Louise Brooks Society." -- Jack Garner, Rochester Democrat and Chronicle

"The Kino blu ray is a beautiful high def transfer.... The insightful audio commentary by Thomas Gladysz offers a wealth of fascinating information about the movie and about Ms. Brooks." -- James L. Neibaur, examiner.com

"... a beautiful and masterfully made social drama. ... New to this edition is commentary by Thomas Gladysz, film historian and director of the Louise Brooks Society." -- Sean Axmaker,  www.cinephiled.com

"Diary of a Lost Girl was another torrid, atmospheric collaboration between American actress Louise Brooks and German director G. W. Pabst. The Kino Classics Blu-ray presents the film in a meticulous digital restoration to savor. Recommended.... The disc includes a feature-length Audio Commentary from scholar Thomas Gladysz, director of the long-standing website The Louise Brooks Society. This was a good, informative track revealing lots of interesting tidbits about the production, the lives of the other actors seen on screen, and Brooks' own recollections on the making of the film." -- Matt Hinrichs, DVDtalk

"Thomas Gladysz, director of the Louise Brooks Society, discusses the ambiguous nature of Georg Wilhelm Pabst's Diary of a Lost Girl, the film's visual style and its impressionistic aura, the relationships between the main characters, interesting details from the lives and careers of some of the principal actors, etc." -- Dr. Svet Atanasov, blu-ray.com

"The results are often excellent, with increased image detail that surpasses our hopes for this edition.... The supplementary material includes a new audio commentary by Thomas Gladysz, director of the Louise Brooks Society." -- Carl Bennett, silentera.com

"Diary of a Lost Girl' is a haunting work of filmmaking that I am very glad to see has made its way to Blu-ray in fine form.... Director of the Louise Brooks Society, Thomas Gladysz provides an interesting look at the film, discussing the style of the film, it's reception as well as some of the production details that are known about the film. A solid listen, especially if you're at all interested in learning more about Brooks herself." -- Matthew Hartman, High-Def Digest

"The movie is subtle and spellbinding—qualities not obvious in inferior prints. Like the earlier disc, it includes Brooks’ unremarkable comedy Windy Riley Goes Hollywood, a talkie short in lousy shape. A new extra is an informative commentary by historian Thomas Gladysz." -- Michael Barrett, popmatters

"If you think you’ve seen sordid, a characterization meant as a compliment, do not go through your movie life without seeing this second of two masterpieces that were filmed in almost boom-boom fashion by Germany’s G.W. Pabst — both starring misused-by-Hollywood Louise Brooks, whose legend is based near-exclusively on these collaborations. The most you can say against Diary of a Lost Girl is to concede its ranking just a sliver behind the previous year’s teaming on Pandora’s Box — that one about as good as the movies get." -- Mike Clark, HomeMedia Magazine

"Brooks is a remarkable screen presence, lighting up Diary's tale of an innocent girl taken advantage of by men and then punished for it.... It would be rare when any film ever was as good as the silent greats at their best, films like this one." -- Michael Giltz, HuffingtonPost

"After “Pandora’s Box,” director G.W. Pabst and actress Louise Brooks teamed up for one of the most stunning melodramas of the silent era. Beautifully restored to its original running time, the Berlin-shot film follows a naive pharmacist’s daughter as she is seduced and abandoned by her father’s assistant. Placed in a horrific home for wayward girls, she escapes only to wind up in a brothel. Way ahead of its time, “Diary” tackles provocative themes of sexuality and exploitation while providing Brooks with a role that helped defined her career. Extras: commentaries and a Brooks short from 1931." -- Amy Longsdorf, Delaware County Daily Times