Louise Brooks in the current issue of New Yorker 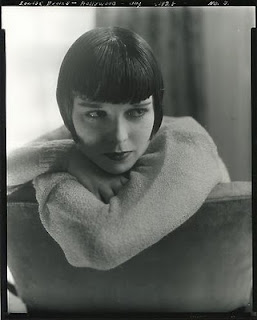 Louise Brooks appears on page 16 of the current, October 31st, issue of the New Yorker. The image (pictured here) is captioned and references an exhibit at the Danziger Projects gallery in New York City.

The gallery had been hosting an exhibit, "Edward Steichen - The Last Printing" (September 15 through October 29, 2011).

Danziger Gallery opened their fall 2011 schedule with a show of 80 Edward Steichen photographs printed by the renowned photographer George Tice. Tice was the last person to print for Steichen in his lifetime. These prints remind us not only of Steichen's genius - and his remarkable talent for portraiture - but also highlight the formidable quality of printing that George Tice has been known for throughout his career.  What follows are a few snippets from the gallery press release.

"By the mid-1920s Steichen was the highest-paid photographer in America. In 1923 he was hired as chief photographer for Condé Nast Publications, and at one point in the 1920s he earned $100,000 a year from his advertising work alone. "

"Steichen's portraits have survived the test of time. He had an uncanny intuition for how to distill the public personae of the famous and make them at once familiar and iconic. It was this that makes him the founding father of our present-day cult of celebrity. His portraits have a extraordinary place in our visual memory – his startling depiction of J.P. Morgan as the archetypical robber baron, clutching the chair arm that resembles a gleaming dagger; his close-up of a feline Gloria Swanson, glowering behind black-lace foliage; his restrained observation of an impossibly handsome and debonair Gary Cooper."

"Steichen's ingenuity in portraiture was coaxing his sitters into heightened expressions of their innermost character. He once considered going into the movies, and there was indeed a cinematic quality in much of his work. As Greta Garbo told him after one shoot: "You should be a motion-picture director. You understand." Sometimes performing artists even made his ideas their own. Steichen's portrait of Fred Astaire silhouetted against his own larger-than-life shadow was the inspiration for similar setups in the dancer's later films."

Louise Brooks Society
Online since 1995, the Louise Brooks Society (www.pandorasbox.com) is a web archive and fan club devoted to the Jazz Age movie star known for her bobbed hair & role as Lulu in the classic silent film Pandora's Box. Send announcements or material to share to the email address on the profile page.
Newer Posts Older Posts Home
Subscribe to: Posts (Atom)